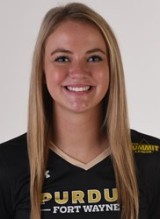 Nicole Rightnowar (senior, human services) was named the Summit League Offensive Player of the Week on October 23. She had a pair of double-doubles with 26 kills and 10 digs against Omaha and 14 kills and and 18 digs against Western Illinois. For the weekend, she had 40 kills, a .198 average hitting percentage, 28 digs, and seven blocks.